Since the devastating earthquake that hit Nepal in April this year The Esther Benjamins Trust in Makwanpur has spearheaded a relief operation, taking aid to a remote village in the hills. Working in conjunction with the local authorities they have brought supplies such as tents, tarpaulins, sleeping mats and food. They obtained support from local police and army units to protect the aid from looters, and set off for the remote communities, up in the hills.  The first leg of the journey was in buses, but when the terrain became very steep, the supplies were transferred to tractors, while the staff had to complete the journey on foot, up steep paths and crossing rivers.  Overnight, staff camped, while the police and army units slept close to the aid supplies to prevent theft. When they arrived in Khairang, Esther Benjamins staff supervised the distribution of aid, helping those in most need first.

An example of some of the ‘shabby chic’ items we have in our barn showroom can be seen on the website, however we have a fast turnover of these items and so it is always worth a trip up to the barn to see what we have in the pipeline or what eccentric Director Bill Holliday is ‘shabbying up’ at the time. 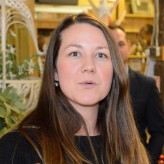 Error: Error validating access token: The session has been invalidated because the user changed their password or Facebook has changed the session for security reasons.
Type: OAuthException
Code: 190
Subcode: 460
Please refer to our Error Message Reference.